A funding gap continues to increase between infrastructure and public development requirements in the United States and traditional financing sources. Consequently, the public sector has turned to the private sector to perform a larger role (whether as project sponsor or as a funding source) in public projects. “Public-private partnerships” (“P3s”) has become the catchphrase for describing such arrangements, which are increasingly taking place in diverse sectors including surface transportation, public transit, airports, water and wastewater treatment, urban development and power generation.

P3s are contractual arrangements formed between public and private sector partners that typically involve a governmental entity contracting with a private partner to renovate, construct, operate, maintain, and/or manage a facility or system, in whole or in part that provides a public service. The contractual relationships in a P3 are designed to bring together the strengths of both the public and private sectors to provide high-quality services in the most cost-effective manner. In addition, P3s allow the public entity to tap private sector resources (technical, management and financial) in new ways to achieve certain public entity objectives.

Since its founding, Chapman and Cutler LLP has been one of the country’s pre-eminent law firms in both state and local government finance and in corporate finance, and has acted as counsel to both public and private sector participants in P3 transactions. We have a long and distinguished record of counseling all types of clients (including sponsors, project companies, lenders, private commercial and investment banks, placement agents, underwriters, credit rating agencies, suppliers, contractors, off-take purchasers and advisors) that are participants or potential participants in P3 transactions. Chapman’s in-depth knowledge of relevant industries, and our experience in mergers and acquisitions and securities offerings, together with our thorough understanding of privatization strategies enable us to effectively counsel both public and private sector P3 participants. Our attorneys are ready to assist your efforts in providing for America’s infrastructure and public development in new and creative ways. 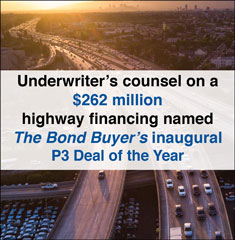